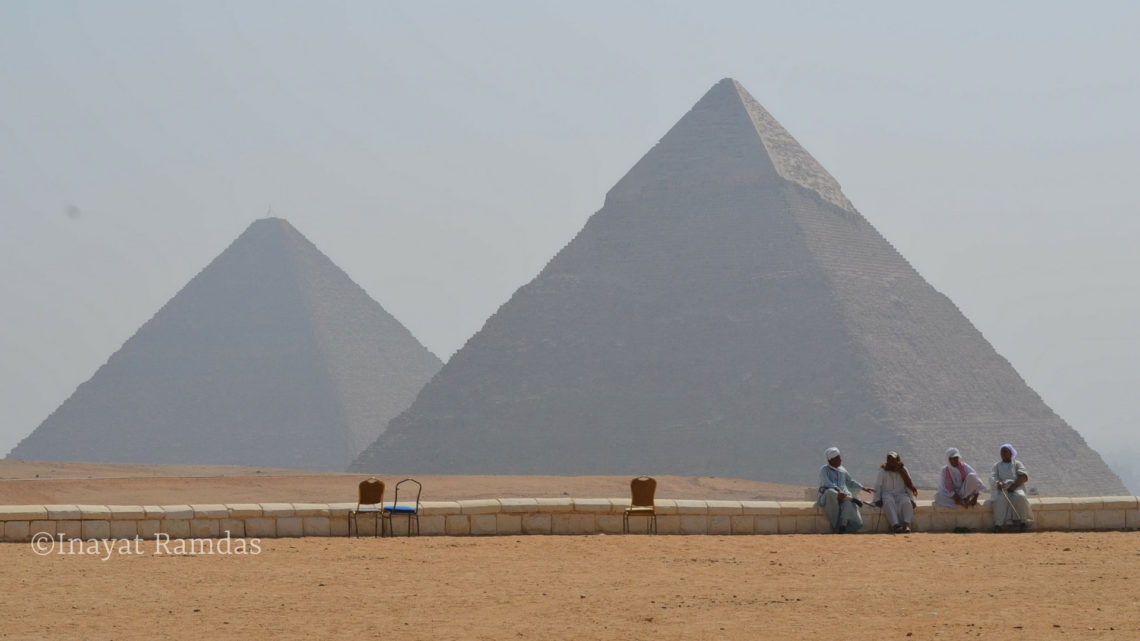 The Umm ad-Dunya, the Mother of the World. Cairo.

The title may seem like a misnomer in the 21st century but you really have to visit the Egyptian capital to see for yourself. Tension and chaos, world famous pyramids and protest squares, centuries-old mummies and vestiges of an old spice trade route all exist together in a beautiful mess in this enchanting North African city.

And though Cairo is the present capital of Egypt, it wasn’t always so. While the pyramids of Giza were being constructed it was Memphis that was the capital of this ancient land. Cairo was formally found around AD 969 by the Fatimid dynasty during their conquest of North Africa.

Cairo was initially raised as Al-Madina al Qahira or ‘the city victorious’ (‘Cairo’ is an anglicised version). The city grew to become one of the biggest hubs in Egypt and remained so even after the Fatimids were overthrown. Today many Fatimid buildings are still in existence like the Al-Azhar mosque and
university.

During the mid 19th century, Cairo suddenly saw a transformation under Ottoman emperor
Mohammed Ali Pasha’s grandson Ismail who turned it around from a marshy-pit into a European-styled  megacity, inviting architects and artists from Italy, Belgium and France.

But with the turn of the century, his beloved city fell into disrepair; revolutions cost the city and a sudden outburst of overpopulation led to ugly construction everywhere.

And wondrously, Cairo has retained its mix of the ancient and the new. In this city of 20 million, every corner holds a surprise . As the Cairenes would say, welcome to Umm ad-Dunya – the Mother of the World.

So what do you do in Cairo?

1. Spend a day at the Pyramids of Giza and the Sphinx 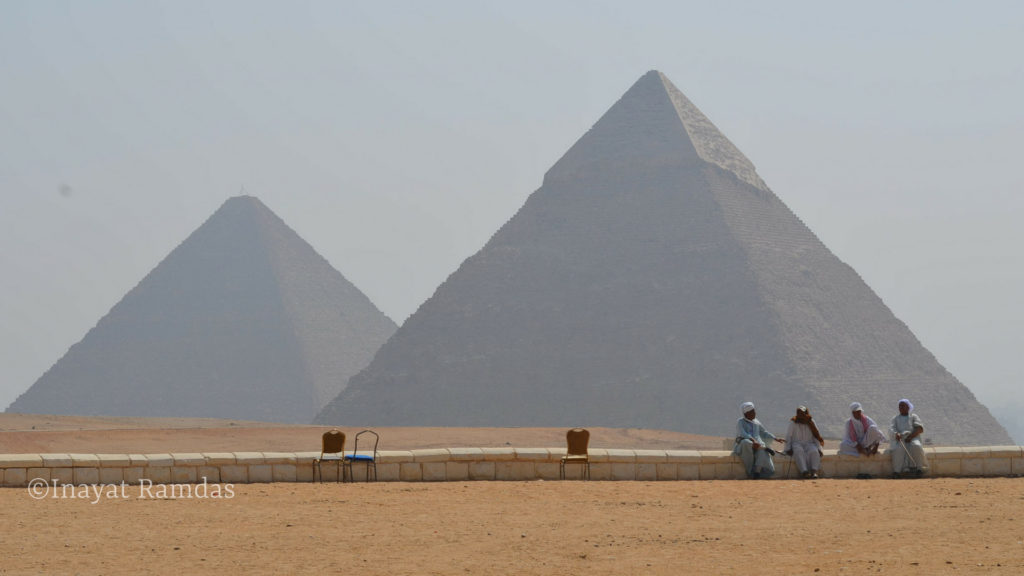 Standing tall against the summer sun, these triangles of sandstone seemed to wink at me from across my hotel in Giza. I couldn’t believe I literally had the pyramids in my backyard!

Over 4,000 years the Pyramids of Giza have rightfully earned their spot as a wonder of the world. The pyramids were meant to homes for Egyptian pharaohs in their afterlife; today, they stand as a true testament of the toil and hard work of thousands of workers and the brilliance of ancient Egyptian architecture.

The complex is home to three main pyramids and the Sphinx– the Great Pyramid of Khufu, the pyramid
of his son Khafre and the Pyramid of Menkaure. Khufu’s is the largest of its kind in Egypt. It was initially 146 meters tall when it was constructed in c. 2750 BC, but successive centuries of weathering reduced its height by nine meters.

Braving claustrophobia and old bat smell, I gingerly step inside and I’m guided up a short not-very-high steep staircase that opens up to a small room with an empty sarcophagus which used to contain Khufu’s mummy.

A fair warning: to climb up, one has to bend to almost 90 degrees so don’t do this if you aren’t bendy or claustrophobic.

Right next door is Khafre’s tomb. It is a smaller at 136 meters and has the remnants of a
limestone cap – originally all three were covered with polished limestone which was later removed and
used in other structures. 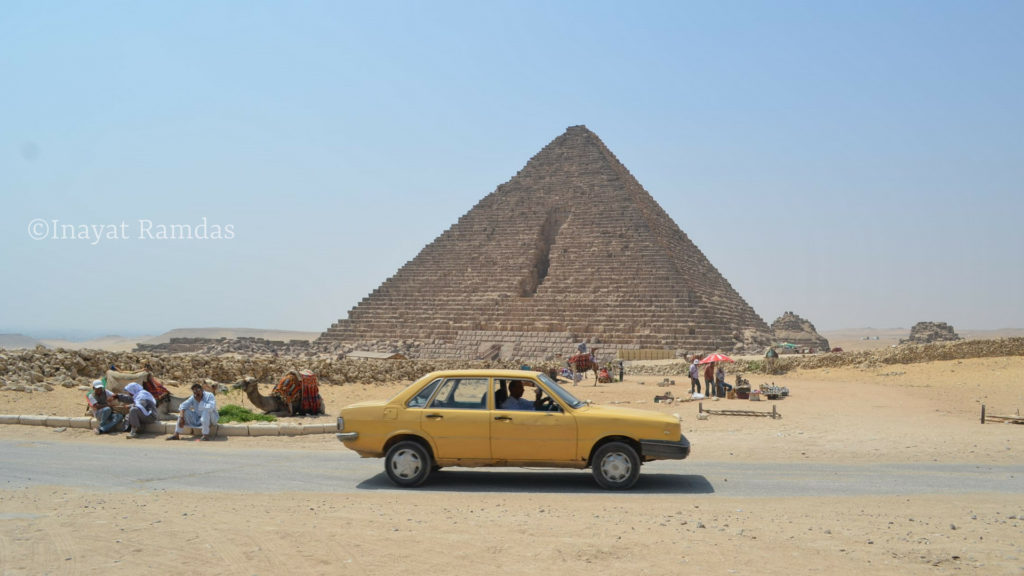 The third pyramid Menkaure, Khafre’s son, stands at a tiny 62 meters with a  large gash on one side, the result of an 12th century prince’s reckless attempt to get to some legendary gold inside. Just off the three are other small step pyramids that belonged to Khufu’s wives and daughters. And behind one of the pyramids is the Solar Baroque Museum which is inside a boat that is believed to have carried a pharaoh’s body across the Nile to the pyramids. 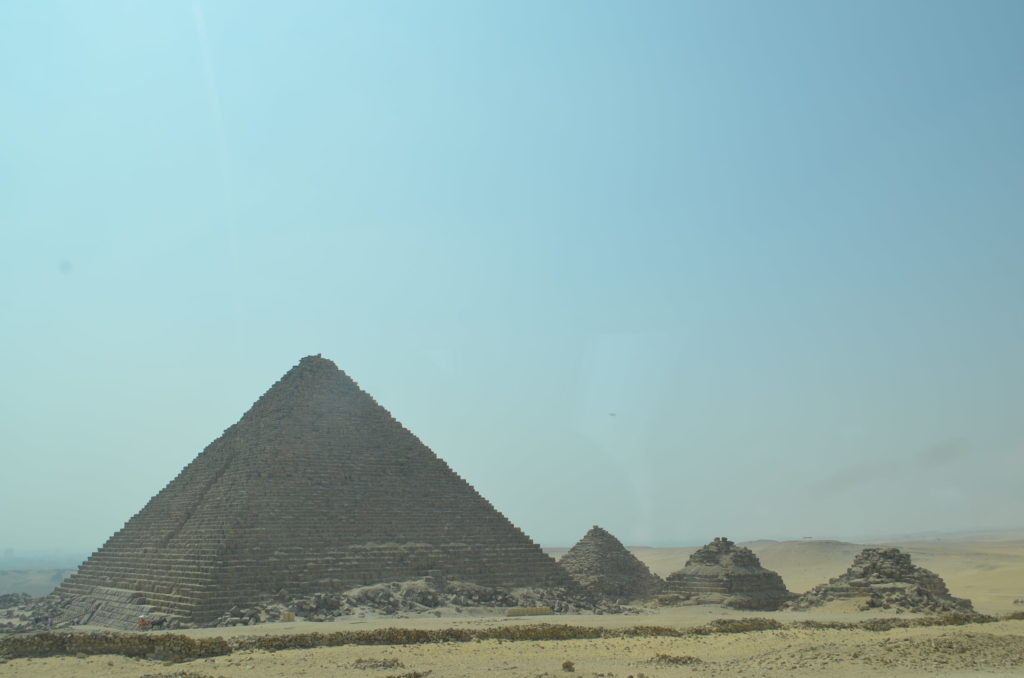 A few hundred photos later, I was bundled into a bus and whisked off to see the famous Sphinx, the ‘feline man’, believed to have been made in the likeness of Khafre. 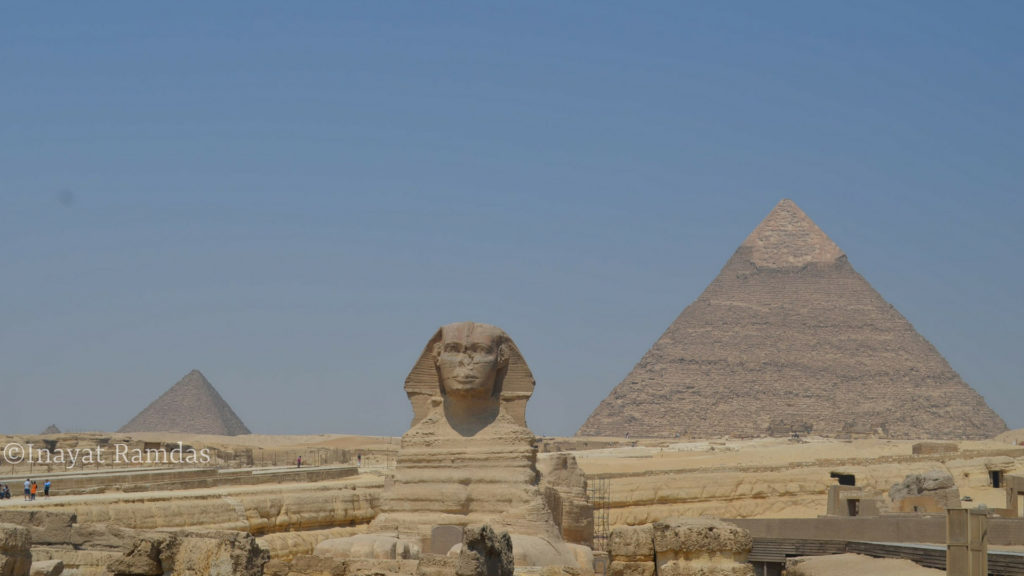 Here I was, all of five feet something, right under the nose of this great structure – ok, technically it doesn’t have a nose. Hundreds of years have passed by and the question still remains – what happened to his nose? Was it cannonballed by Napoleon and his men? Or was it vandalised much earlier? 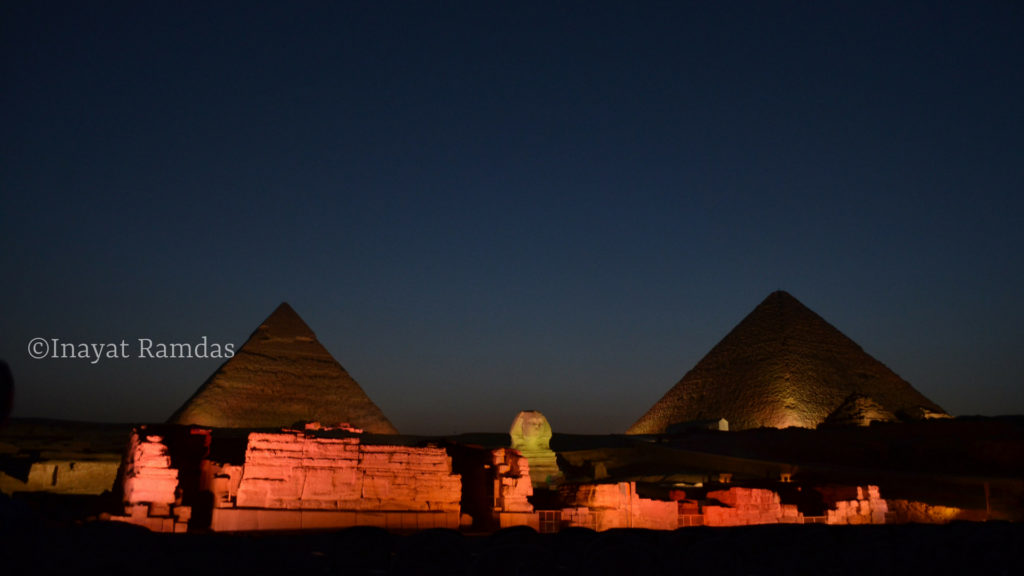 I return to my room clueless only to return in the evening for a spectacular sound and light show that showcases Egypt’s history on the structures.

2. Stroll around the Egyptian Museum

The Egyptian Museum in Downtown Cairo is home to some of the world’s most precious
artefacts, including the treasures from boy-pharaoh Tutankhamun’s famed tomb.

It’s pink building stands tall on one side of the famed Tahrir Square. The museum, established in 1902, boasts of a staggering 100,000 strong collection of artefacts in its 15,000 sq meters. Sadly the museum was subject to burglaries in the 90s and during the recent 2011 revolution, more precious artefacts were stolen.

The star attraction for me was of course Tutankhamun’s room (which can’t be photographed) with its grand collection of jewels like his famous mask and other ornaments that he took to the afterlife.

There are also precious papyrus manuscripts, more tombs and ornaments and mummies, some even in their colourful sarcophagus. The best war to explore the museum would be to pick up an audioguide.

3. Watch a protest at Tahrir Square 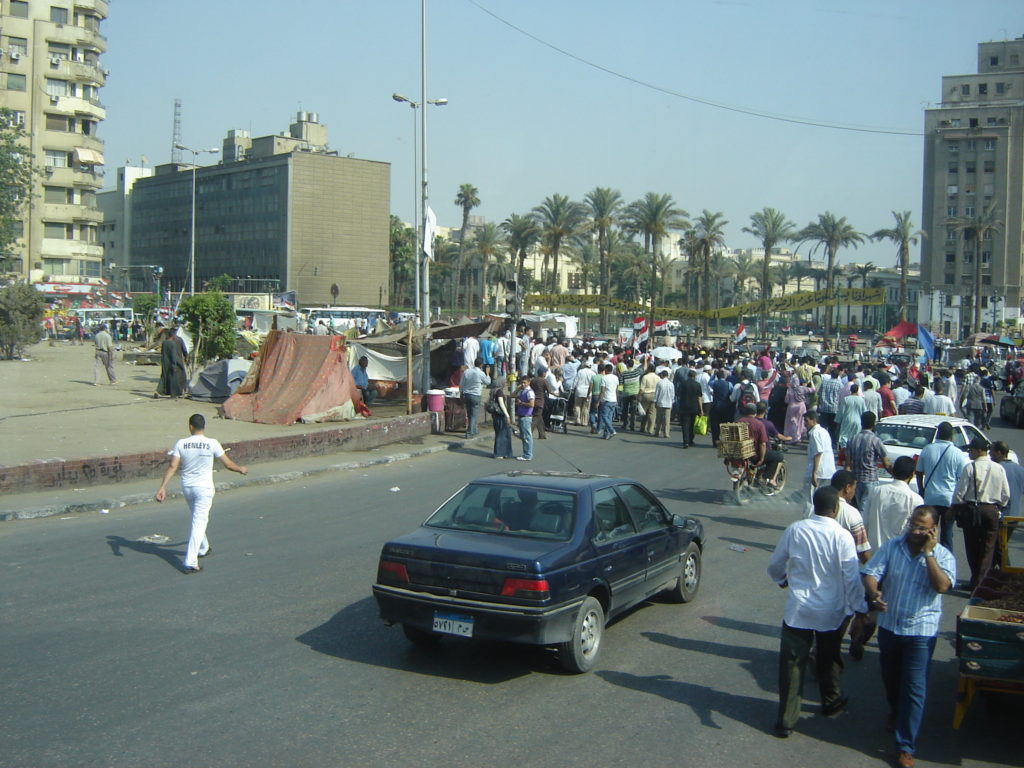 Right after I left the museum, I noticed an agitation brew in the square. Later that night, that small gathering turned into a big movement; the supporters rallied for their future president, Mohamed Morsi. This was back in the summer of 2012. And of course, a year later a coup d’état deposed Morsi!

The square is nothing much to look at really. Its just a round circle of dirt with some shrubbery in the
midst of the bustling Cairo that is surrounded by the Egyptian Museum and a few hotels and
shops. But it is an important landmark in Egyptian history for being the site where the January 2011 revolution ended the 30-year rule of autocrat Hosni Mubarak, who was then ousted.

Ever since, the square has hosted many a famous protest, mostly against the government
and authorities. For the average Egyptian, it is also a place for debate and even
celebration.

This mosque is a remnant of the Fatimid Empire in Cairo. Built in AD 972, it is still
a really important mosque and its sheikh is considered the highest theological authority for Muslims in the country.

Inside, a tomb chamber has a niche called mihrab in the direction of Mecca. The courtyard has three intricate minarets built in the 14th , 15th and 16th centuries. 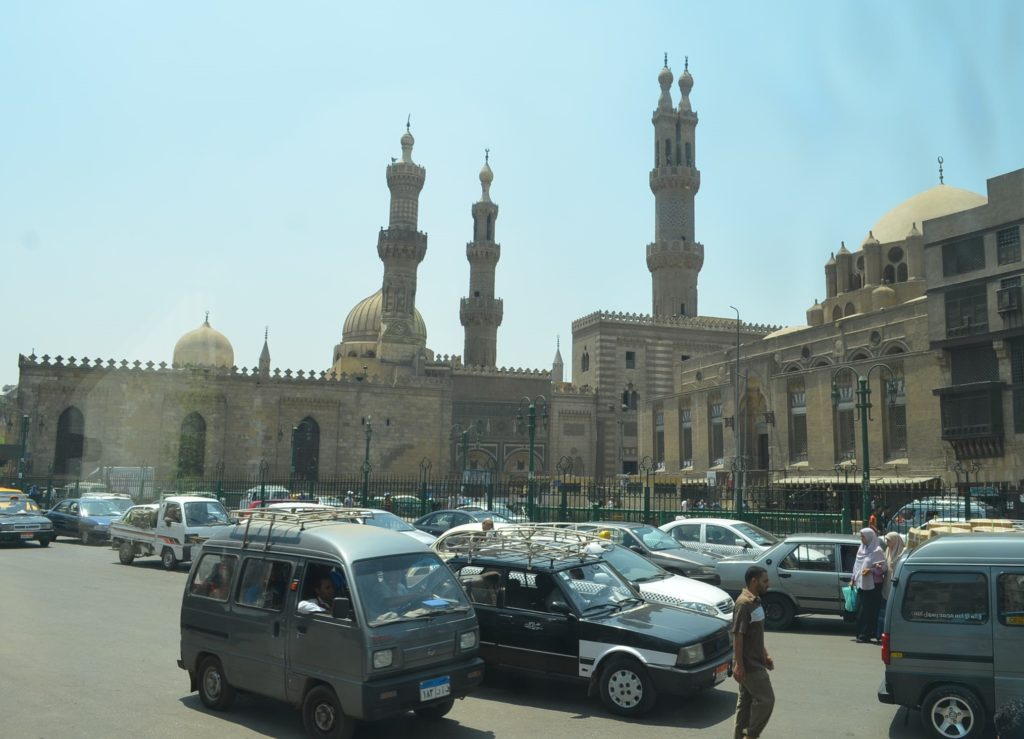 The Al-Azhar Mosque also has a madrassa established in AD 988, one of the world’s oldest educational institutions.

A day maneuvering through the skinny lanes of this 14th century Arabian souk is a must. It remains the hub for local traders as it did so many centuries ago. 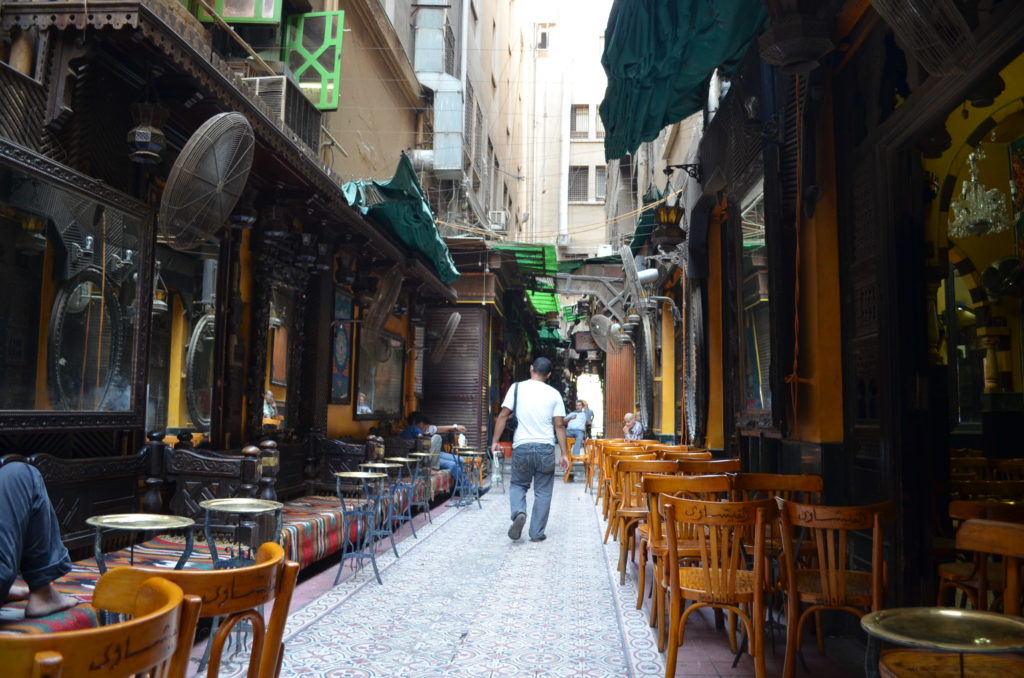 Most shops are arranged around small courtyards and sell everything from spices,
semi-precious stones, souvenir t-shirts to daily necessities. It is quite like Delhi’s Chandni Chowk without the cars, two-wheelers and cattle. Salesman will come at you from all sides, thrusting merchandise on your face. But if you’re like me, take in the atmosphere and refrain from picking up too many things here – it can be tempting! 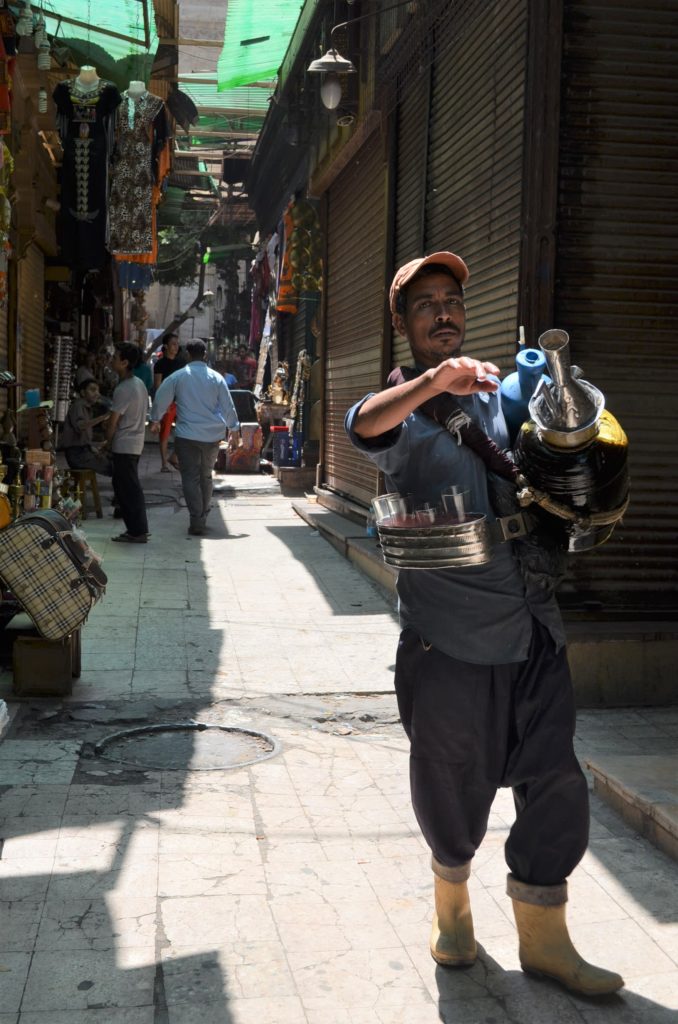 Later, head to  Fishawi café, Cairo’s oldest, for a cup of hot Arabic coffee to calm the senses.

6. End with Dinner on the Nile

I couldn’t ask for a better last night in Cairo: a dinner cruise on the Nile. I boarded one of the boats parked on the harbor and we set off under Cairo’s spectacular night lights. 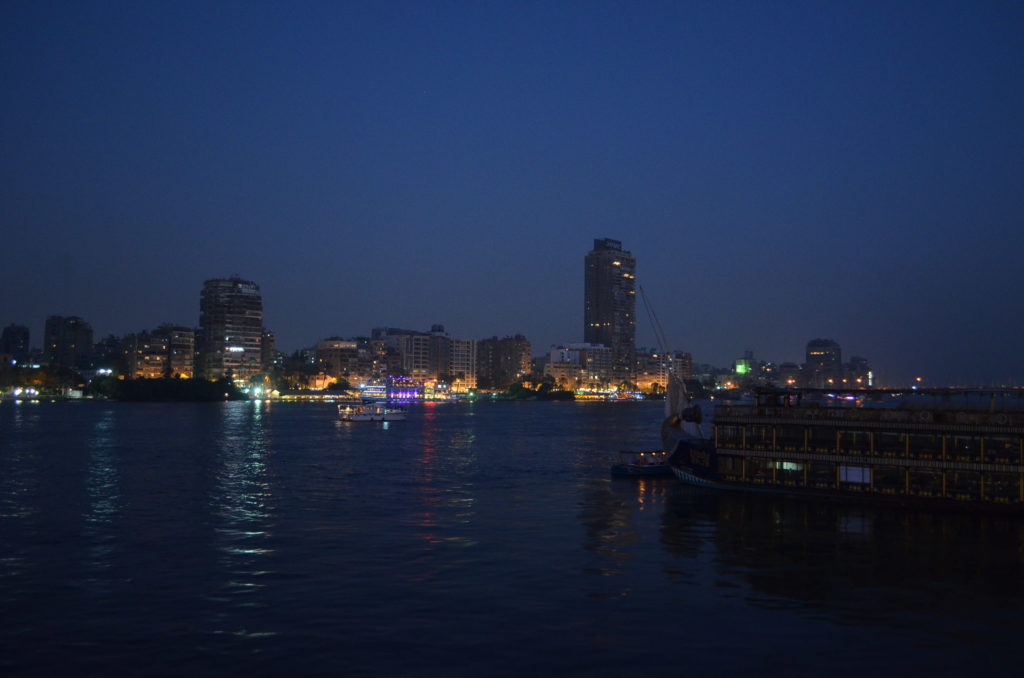 Many photos later, I left the deck reluctantly to join the rest of my family for dinner where belly dancers and Robert DeNiro-looking dervishes serenaded us. 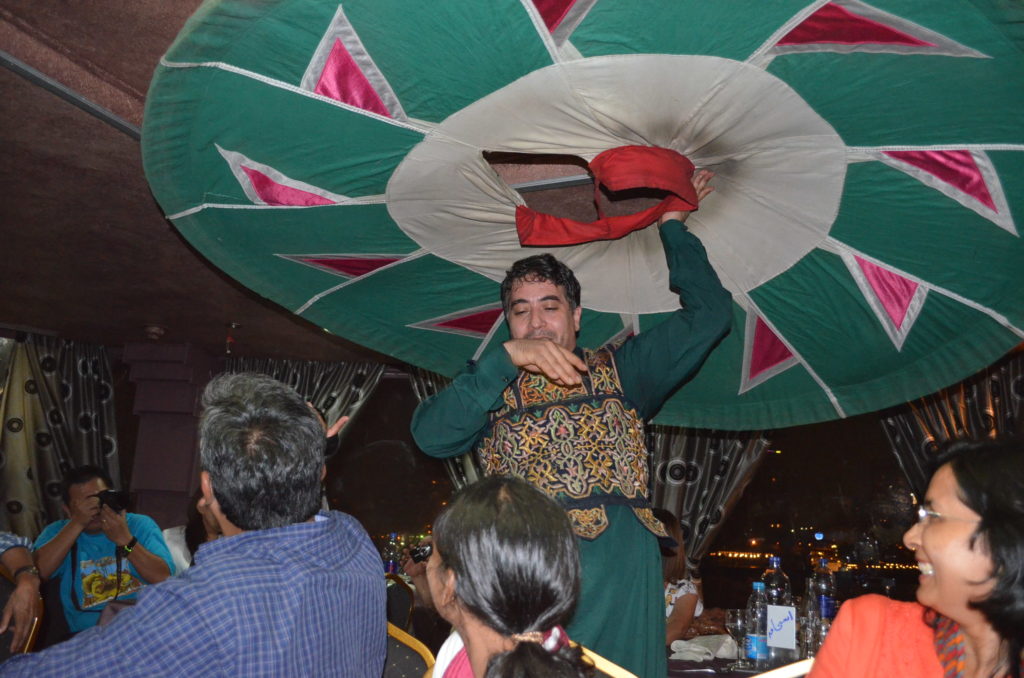 Those three hours cruising down the world’s longest waterway was the perfect ending to a lazy, chaotic and wonderful trip to Cairo. 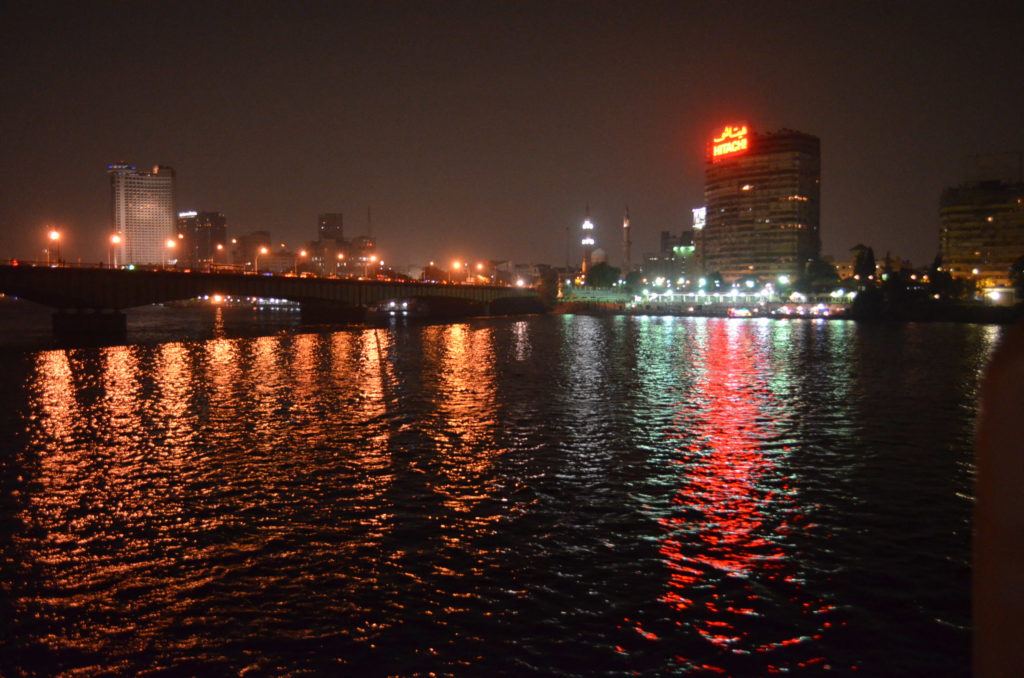 Also read: Top Five Things to do in Egypt’s Aswan 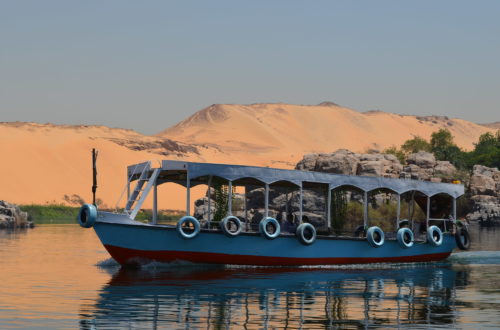 Top Five Things to do in Egypt’s Aswan